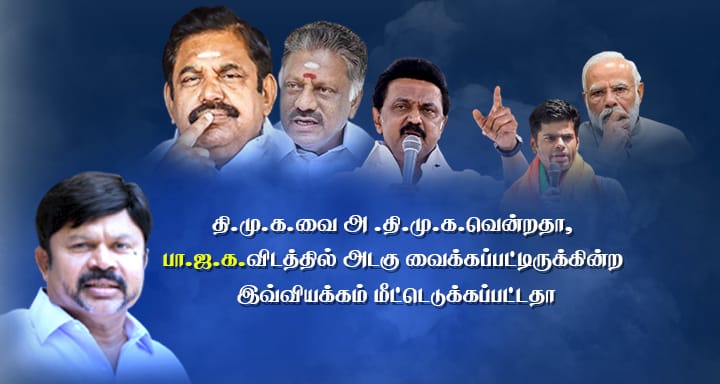 A former party parliamentarian on Thursday said that the AIADMK is now under the control of Tamil Nadu caretaker Chief Minister O. Panneerselvam.

K.C. Palaniswamy said that with the coming together of Panneerselvam and party Presidium Chairman E. Madhusudanan, the party was now effectively out of the clutches of interim General Secretary V.K. Sasikala.

Earlier, Madhusudanan came to Panneerselvam’s residence and extended support to him.

“Now the holders of the top two party posts have joined together. The party is under their control,” Palaniswamy told IANS, adding that all party members and legislators would…

EC has sent a communication to AIADMK asking them to explain what rules of their constitution were followed to appoint the general secretary after certain complaints were raised to EC. However, no deadline has been given to them to explain the matter.

The question from EC comes amid a series of events which…

For all the allegations of disloyalty and betrayal that VK Sasikala has pinned on caretaker chief minister O Panneerselvam, the golden words of his mentor J Jayalalithaa are coming to his rescue.
In a video that is now rapidly going viral on social media, Jayalalithaa had sung hymns of praise for her man Friday Panneerselvam at what appears to be a party function. The remarks are considered special as rarely has the AIADMK leader acknowledged the contributions and work of anyone other than MG Ramachandran within…

Chennai: The Election Commission should consider the extraordinary political situation in Tamil Nadu and soon decide on the legal status of AIADMK general secretary VK Sasikala, a former party parliamentarian said on Wednesday.

“I have filed a case in the Madras High Court to direct the Election Commission to decide on my complaint against the election of Sasikala as AIADMK’s interim general secretary,” Palaniswamy told IANS.

“However the EC should decided…

Tamil Nadu’s ruling AIADMK needs to evolve a collective leadership to galvanise its cadres, who are against the present dispensation, and move forward, a former MP has said. “At the ground level, the cadres are not for the current dispensation at the party’s top leadership. The days of the party revolving around a single individual – example party founder and Chief Minister late M.G.Ramachandran (MGR) and his successor General Secretary and…

Sarecxi manqanis xelosani
Privacy Policy
This example demonstrates how to create a "scroll to top" button that becomes visible when the user starts to scroll the page.
குழுவில் இணைய