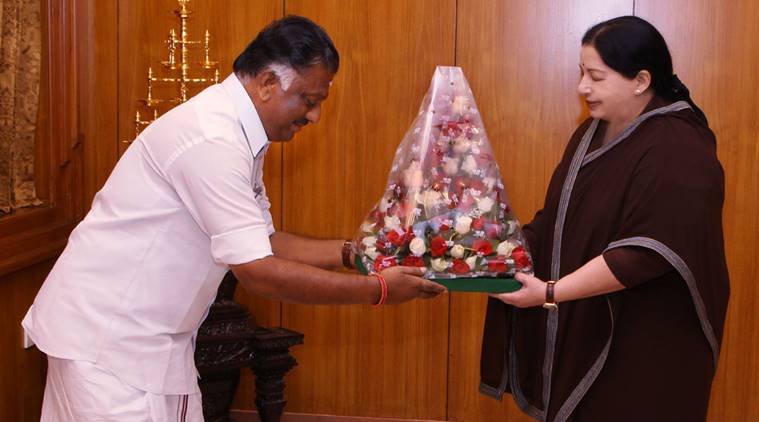 For all the allegations of disloyalty and betrayal that VK Sasikala has pinned on caretaker chief minister O Panneerselvam, the golden words of his mentor J Jayalalithaa are coming to his rescue.
In a video that is now rapidly going viral on social media, Jayalalithaa had sung hymns of praise for her man Friday Panneerselvam at what appears to be a party function. The remarks are considered special as rarely has the AIADMK leader acknowledged the contributions and work of anyone other than MG Ramachandran within the party.

“These days everyone is in a hurry to succeed. They want name and fame as soon as they join a new organisation or immediately become an MLA or minister. They have so many desires. Joining a party and taking responsibility is not like making Bru instant coffee. I want to tell you all how O Panneerselvam reached this place in the party,” said Jayalalithaa as she went on to read out the positions that the leader has held within the party from the time he joined AIADMK in 1977.

From starting out as a member of the Periyakulam ward-18 in 1980 to eventually becoming the chief minister of the state in 2001, Jayalalithaa spelt out Panneerselvam’s rich political resume in front of a large crowd that ironically also consisted of Sasikala, the current general secretary of the party. Panneerselvam was seen sitting on the dais when Jayalalithaa made the remarks.

Today, in the light of the fierce feud that has broken out between Sasikala and Panneerselvam, the chief minister’s supporters are sharing the video in large numbers to good effect on social media. The video was shared more than 38,000 times from a single Facebook page.
Panneerselvam, who had resigned from the chief minister’s post on Sunday citing personal reasons but was asked by the Centre to stay on until the new chief minister is sworn in, raised the banner of revolt late Tuesday night after a 40-minute prayer session at Jayalalithaa’s memorial on Marina Beach. He alleged Sasikala and a few ministers had forcibly made him resign from the post. The leader who has always stepped into the chief minister’s chair whenever Jayalalithaa had to resign in connection with disproportionate assets charges has garnered a lot of support from party cadres and workers. But Sasikala, in an address earlier today, termed Panneerselvam a ‘traitor’ with an intention to create a split in the party. A majority of the party lawmakers are also believed to have promised their support to her.